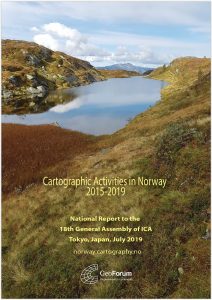 The most central institutions/companies are however represented in the report. Each institution/company is introduced together with a couple of examples of Cartographic products.

The report can also be downloaded as a pdf:

This is a cut of the Norwegian winner of the map exhibition at ICC in Rio de Janeiro 2015 (Paper maps). The map is made by the Norwegian Polar Institute.